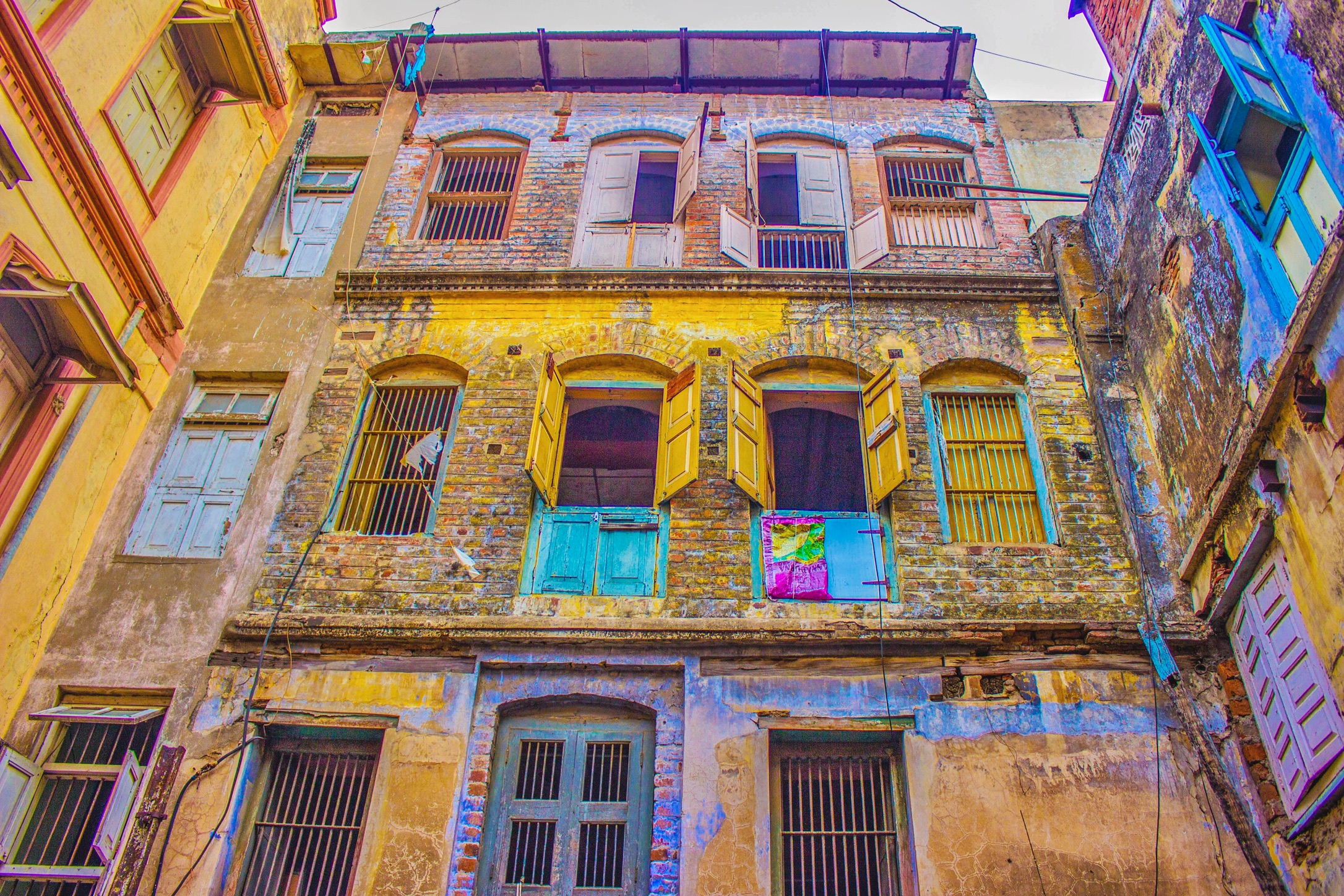 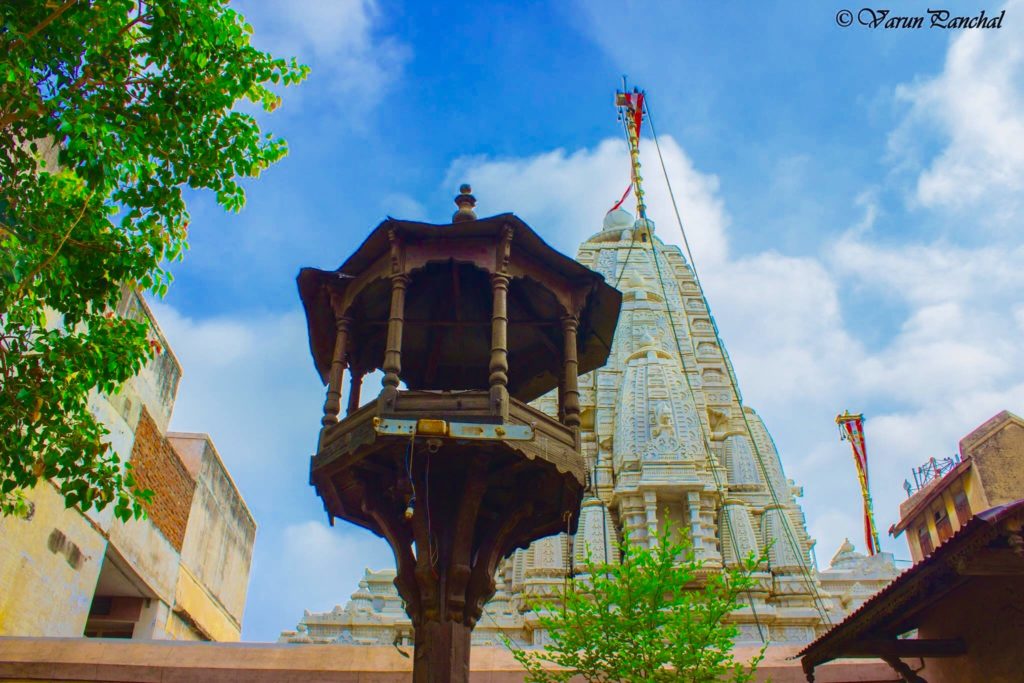 Ahmedabad has officially been declared as one of the world heritage city by UNESCO in a meeting at Poland’s krakow city. Ahmedabad made in to this list because of it’s rich and old culture and architecture, it’s elegant carvings in it’s Hindu and Jain temples as well as standing as one of the finest examples of Indo-Islamic architecture and Hindu Muslim art. The walled city of Ahmadabad, founded by Sultan Ahmad Shah in the 15th century, on the eastern bank of the Sabarmati river, presents a rich architectural heritage from the sultanate period, notably the Bhadra citadel, the walls and gates of the Fort city and numerous mosques and tombs as well as important Hindu and Jain temples of later periods. The urban fabric is made up of densely-packed traditional houses (pols) in gated traditional streets (puras) with characteristic features such as bird feeders, public wells and religious institutions. The city continued to flourish as the capital of the State of Gujarat for six centuries, up to the present.

Let’s take a look of some of the heritage sites of Ahmedabad. 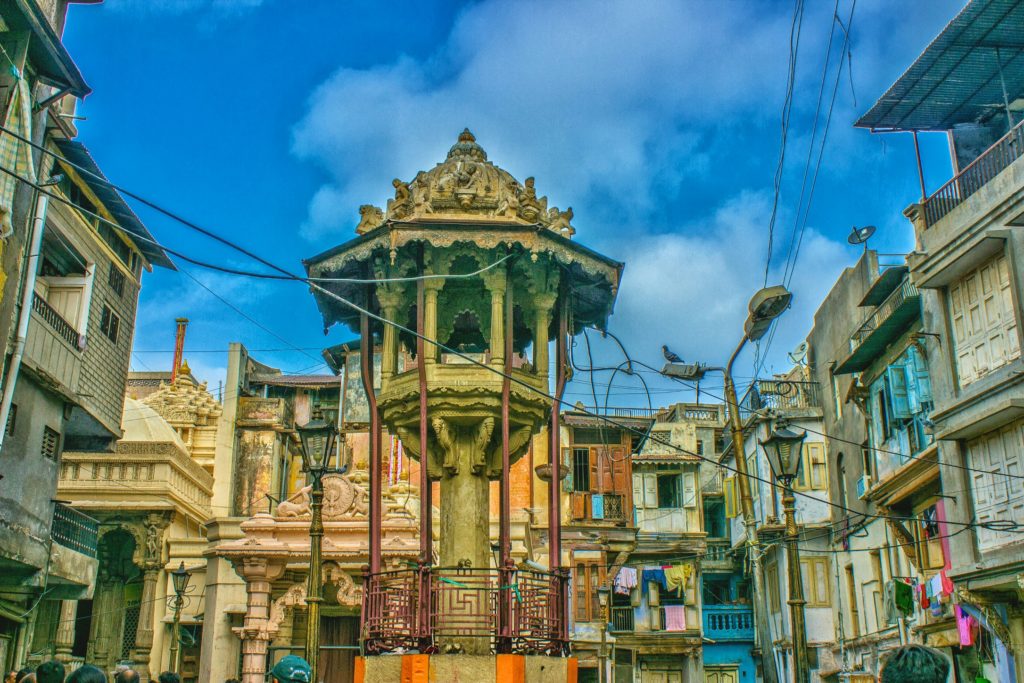 1- Pols in heart of Ahmedabad

A pol in India is a housing cluster which comprises many families of a particular group, linked by caste, profession or religion. There are bird feeders in each pol known as chabutaro, tall poles that the people of Ahmedabad put up for birds to replace the trees cut down when they built the city, and crevices they built into walls for birds to us as house. This walled city was built before motor vehicles, meant for pedestrian and bicycle, so it’s small windy streets are best explored on foot. 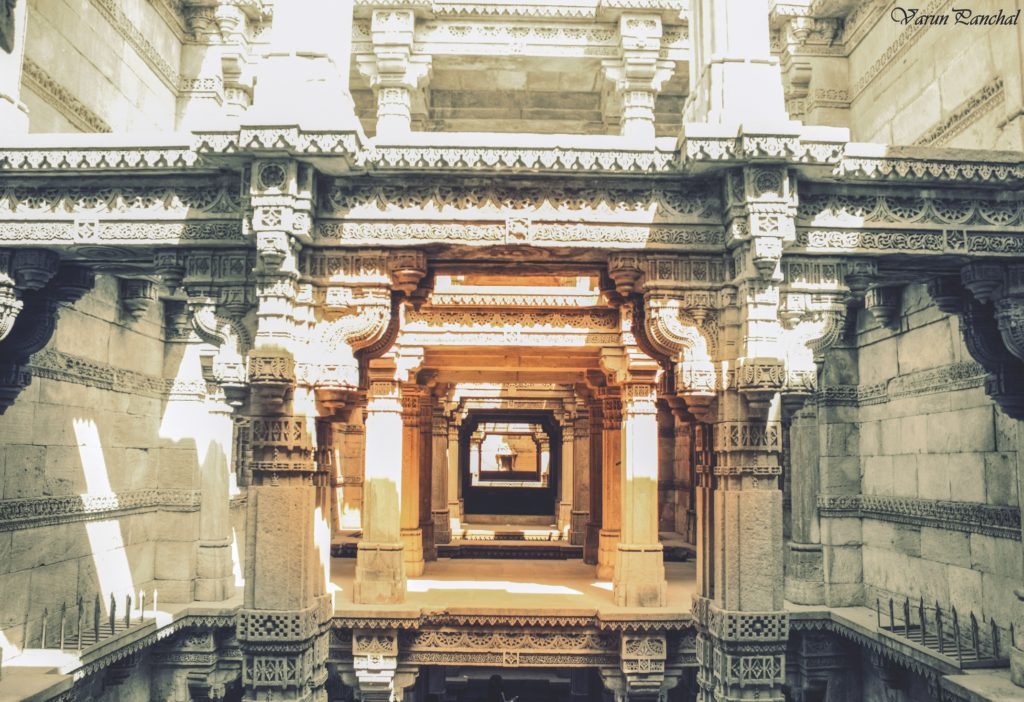 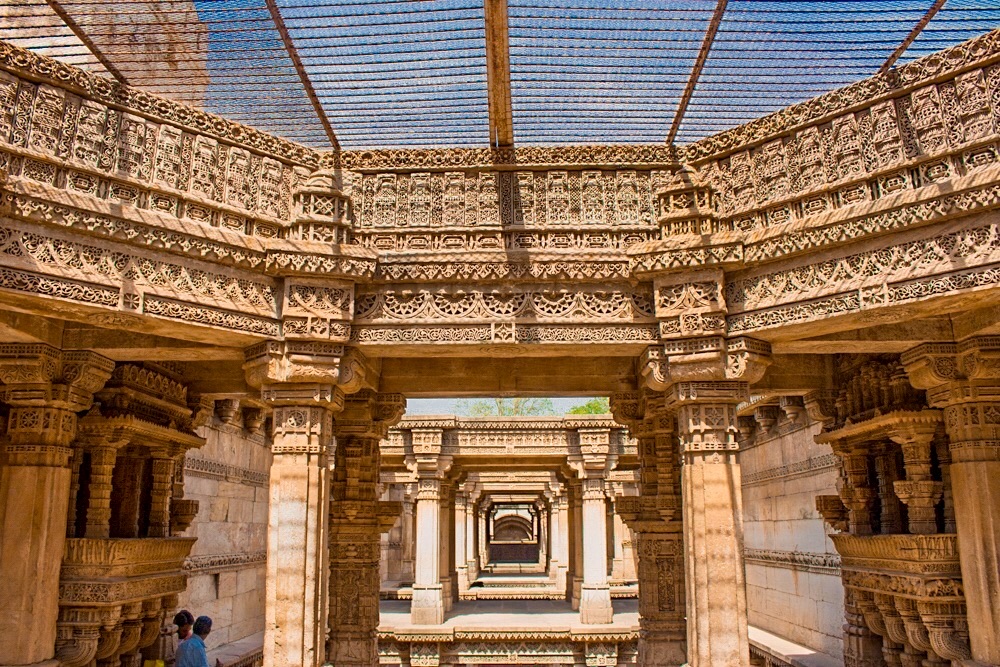 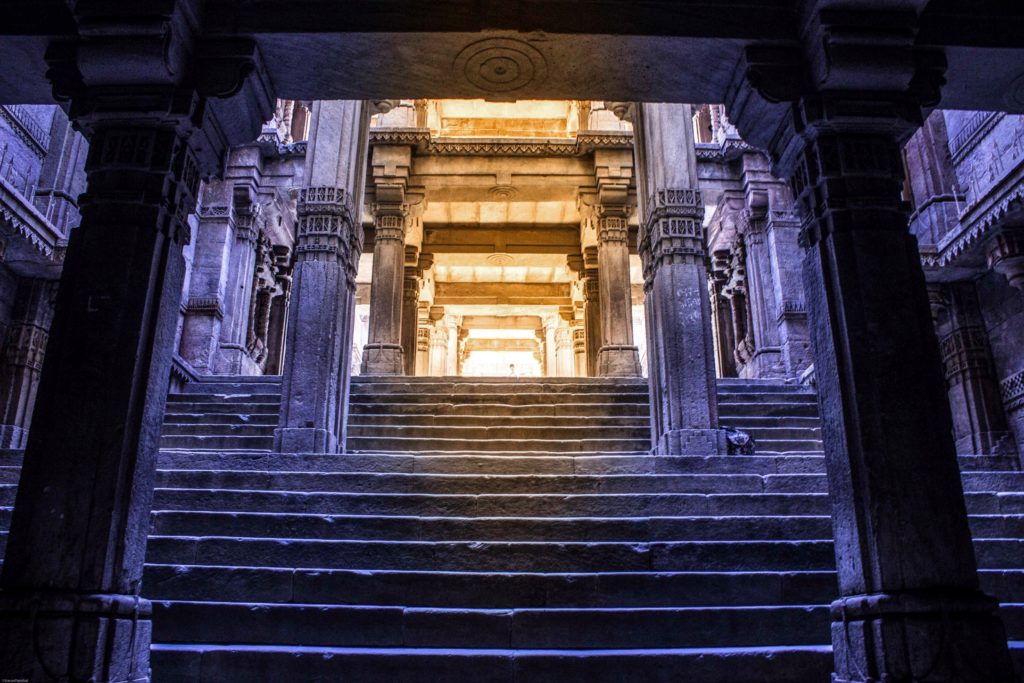 Adalaj Stepwell is a Stepwell located in the village of Adalaj, close to Ahmedabad city and In Gandhinagar.district in the Indian state of Gujarat. It was built in 1498 by Rana Veer Singh of the Vaghela dynasty of Dandai Desh. It is an example of Indian architecture work. The step well or ‘Vav’, as it is called in Gujarati, is intricately carved and is five stories deep. Such step wells were once integral to the semi-arid regions of Gujarat, as they provided water for drinking, washing and bathing. These wells were also venues for colourful festivals and sacred rituals. stepwells, also called stepped ponds, built between the 5th and 19th centuries, are common in Western India; over 120 such wells are reported in the semi-arid region of Gujarat alone, of which the well at Adalaj is one of the most popular. 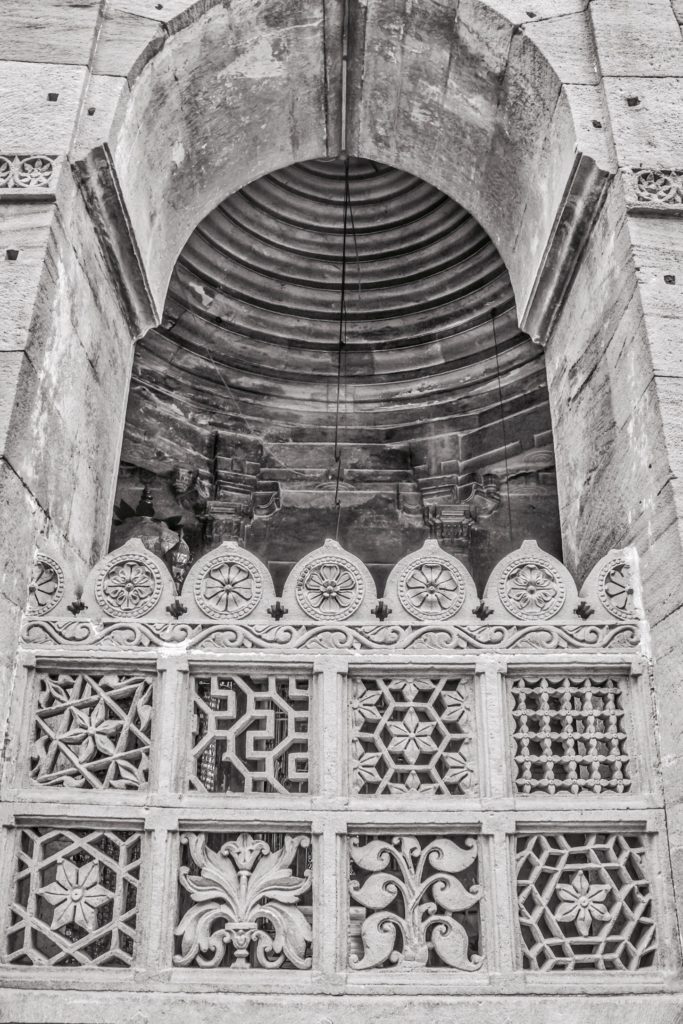 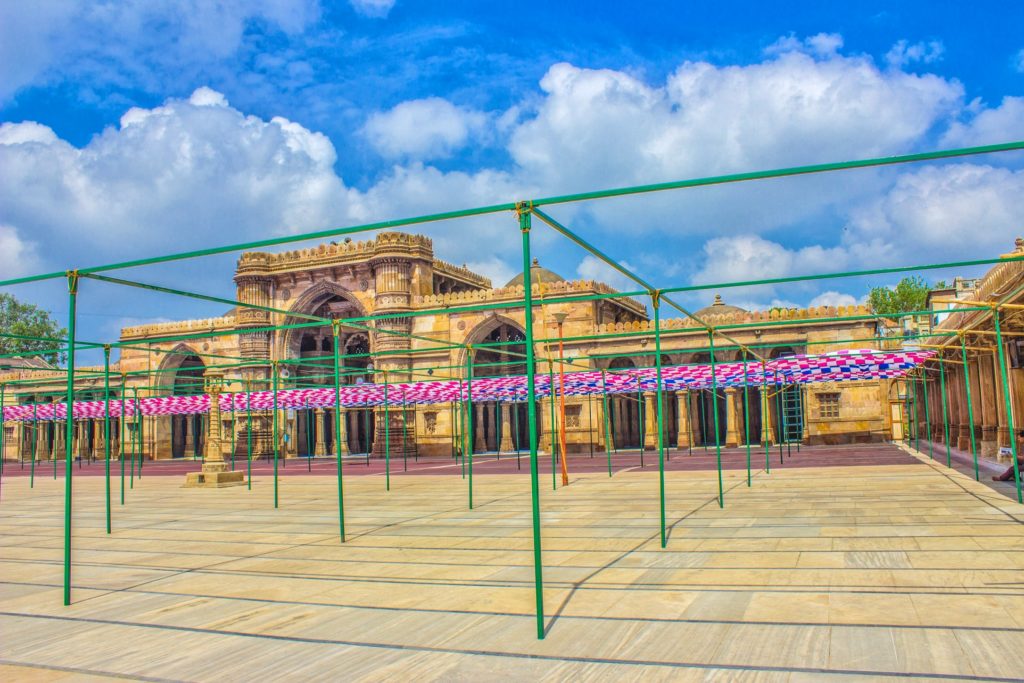 (literally Friday Mosque), also known as Jami or Jumma Mosque, is the most splendid mosque of Ahmedabad, built in 1424 during the reign of Ahmed Shah I. Lying in the old walled city, the mosque is situated outside Bhadra Fort area, along the south side of the road extending from Teen Darwaza to Manek Chowk.Built with yellow sandstone, The prayer room is also rectangular and covered by four domes. In its Indo-Saracenic architecture, the mosque also contains many syncretic elements not necessarily obvious to the viewer: some of the central domes are carved like lotus flowers, closely related to the typical domes of Jain temples; and some of the pillars are carved with the form of a bell hanging on a chain, in reference to the bells that often hang in Hindu temples. 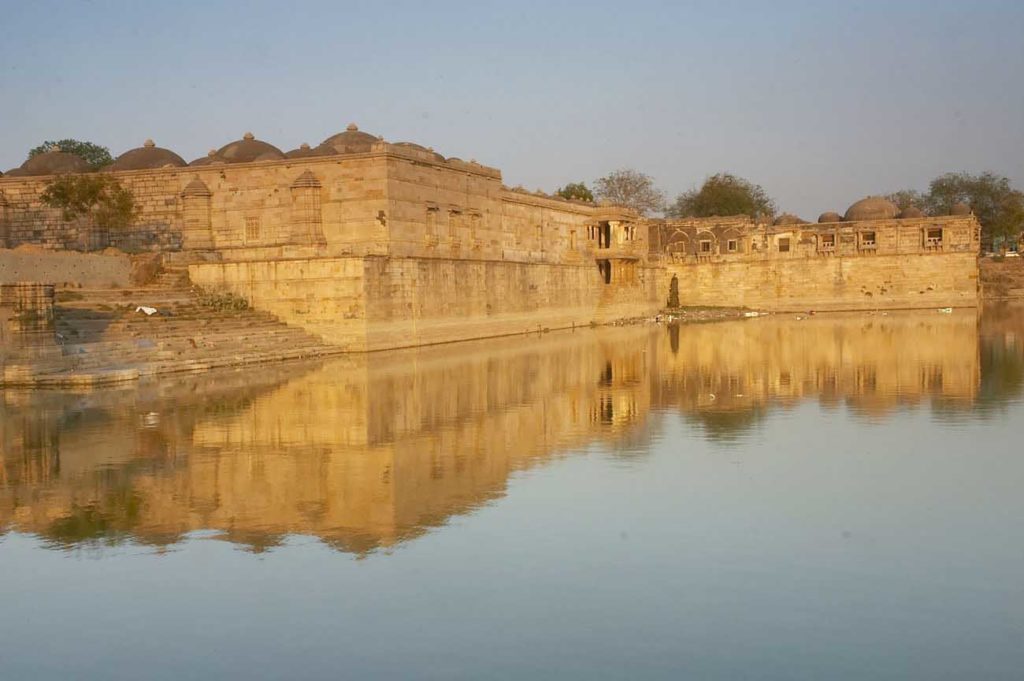 About 8 kms. from the city, Sarkhej comprises one of the most elegant architectural complexes of Ahmedabad. Grouped around a great stepped tank is the tomb to the saint, Ahmed Khattu Ganj Baksh (1445), the mosque, the tombs of Mehmud Shah Begada and his queen, and the palace and pavilions. The buildings are remarkable for the complete absence of arches and the use of pierced stone trellises throughout. 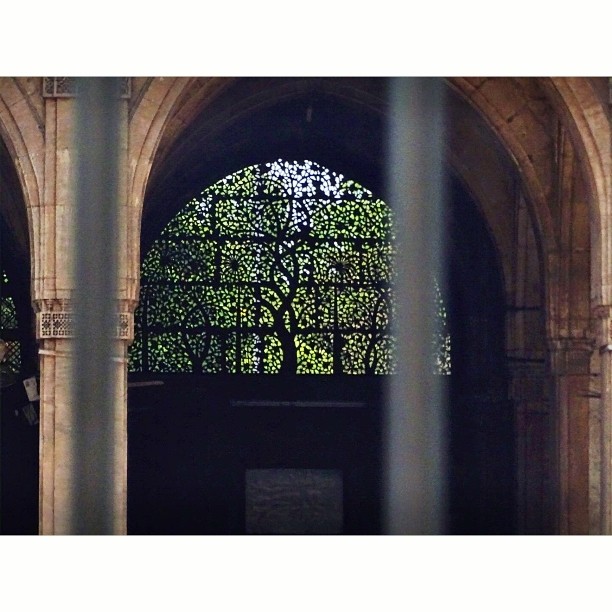 The Sidi Saiyyed Mosque more popularly known as “Sidi Saiyyed ki Jaali” (Sidi Saiyyed Ni Jaali), built in 1573, is one of the most famous mosques of Ahmedabad. As attested by the marble tablet fixed on the wall of the mosque, it was built by in the retinue of sultan Ahmed Shah Bilal Jhajar Khan, general in the army of the last Sultan Shams-ud-Din Muzaffar Shah III of the Gujarat Sultanate.The mosque was built in the last year of the existence of Sultanate of Gujarat. The mosque is entirely arcuated and is famous for beautifully carved ten stone latticework windows (jalis) on the side and rear arches. The rear wall is filled with square stone pierced panels in geometrical designs. The two bays flanking the central aisle have reticulated stone slabs carved in designs of intertwined trees and foliage and a palm motif. This intricately carved lattice stone window is the Sidi Saiyyed Jali, the unofficial symbol of city of Ahmedabad and the inspiration for the design of the logo of the Indian Institute of Management Ahmedabad.

Apart from this there are 56 more sites like Jhulta minara, Bhadra fort and Thin darwaja to visit in 5 km around area in The walled city.

So, for all travel freaks and wanderlust people you don’t have to go outside of India to fulfill your desires to visit heritage. 9 Things you should know, if you are on fruits diet! 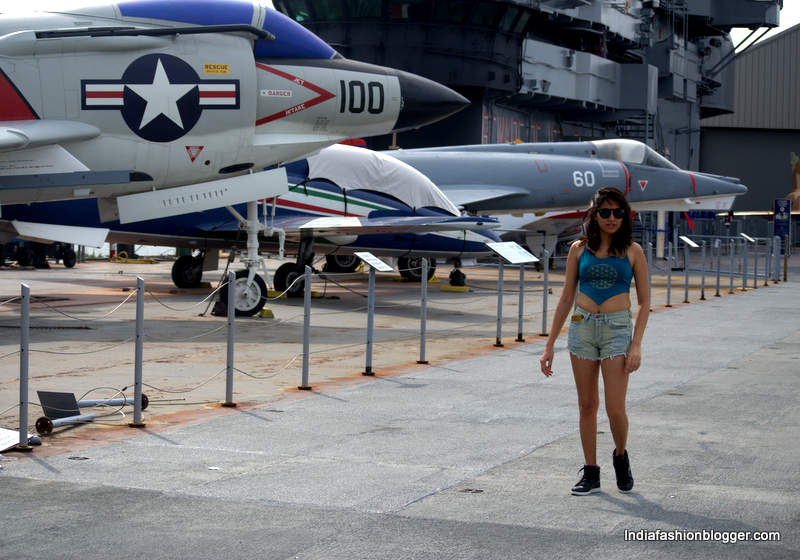 How to wear denim this monsoon! 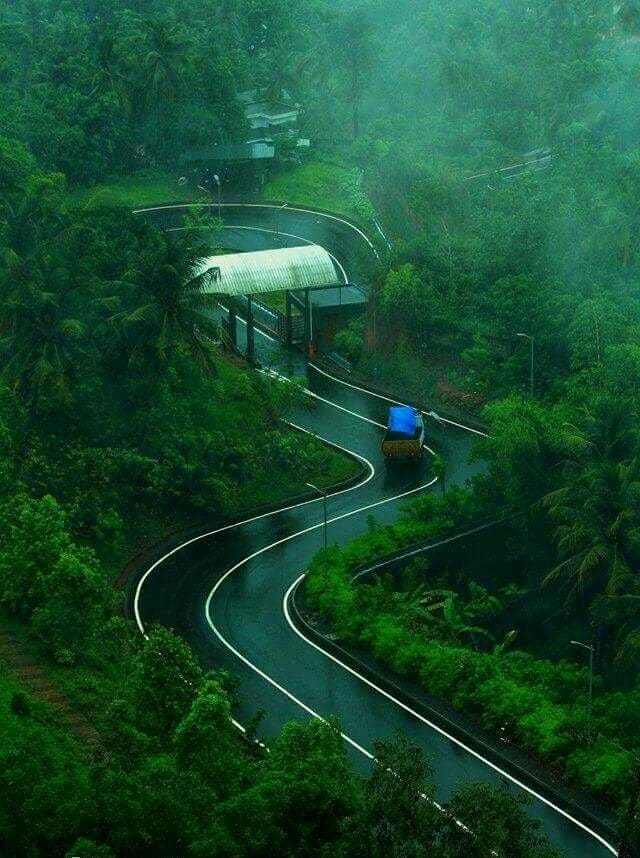 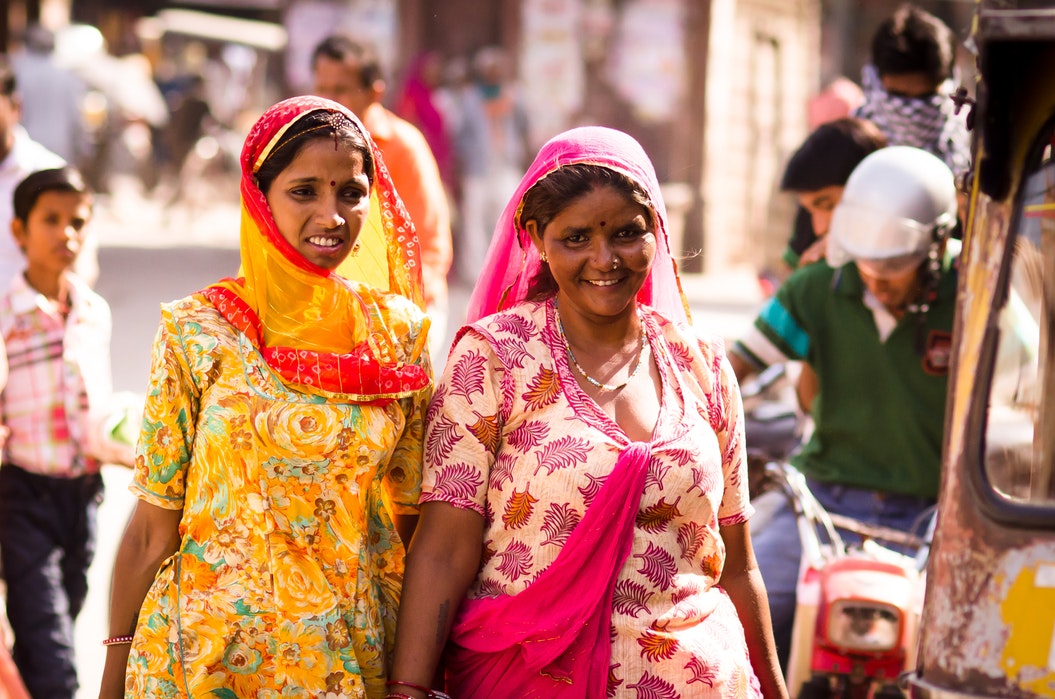 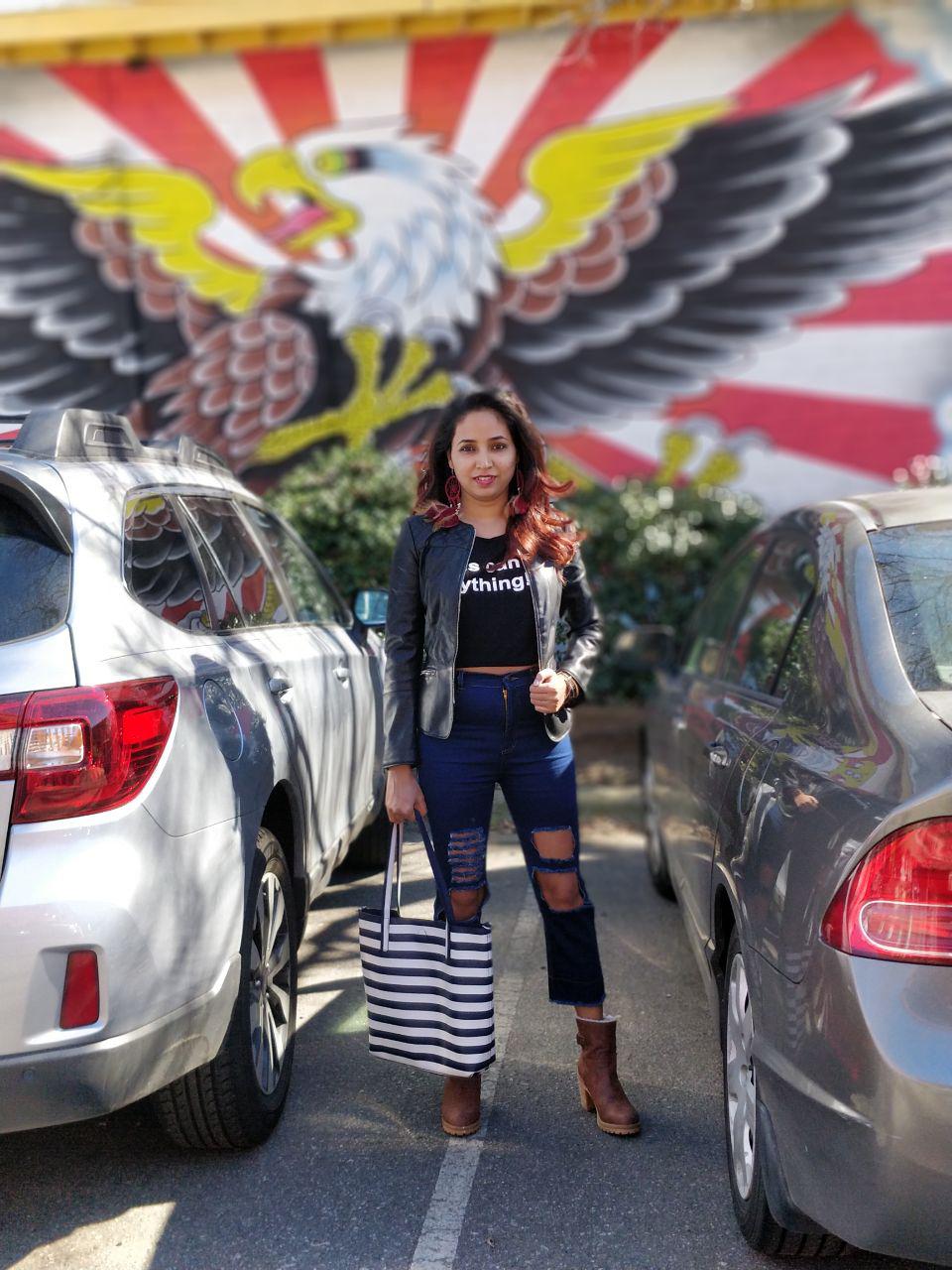 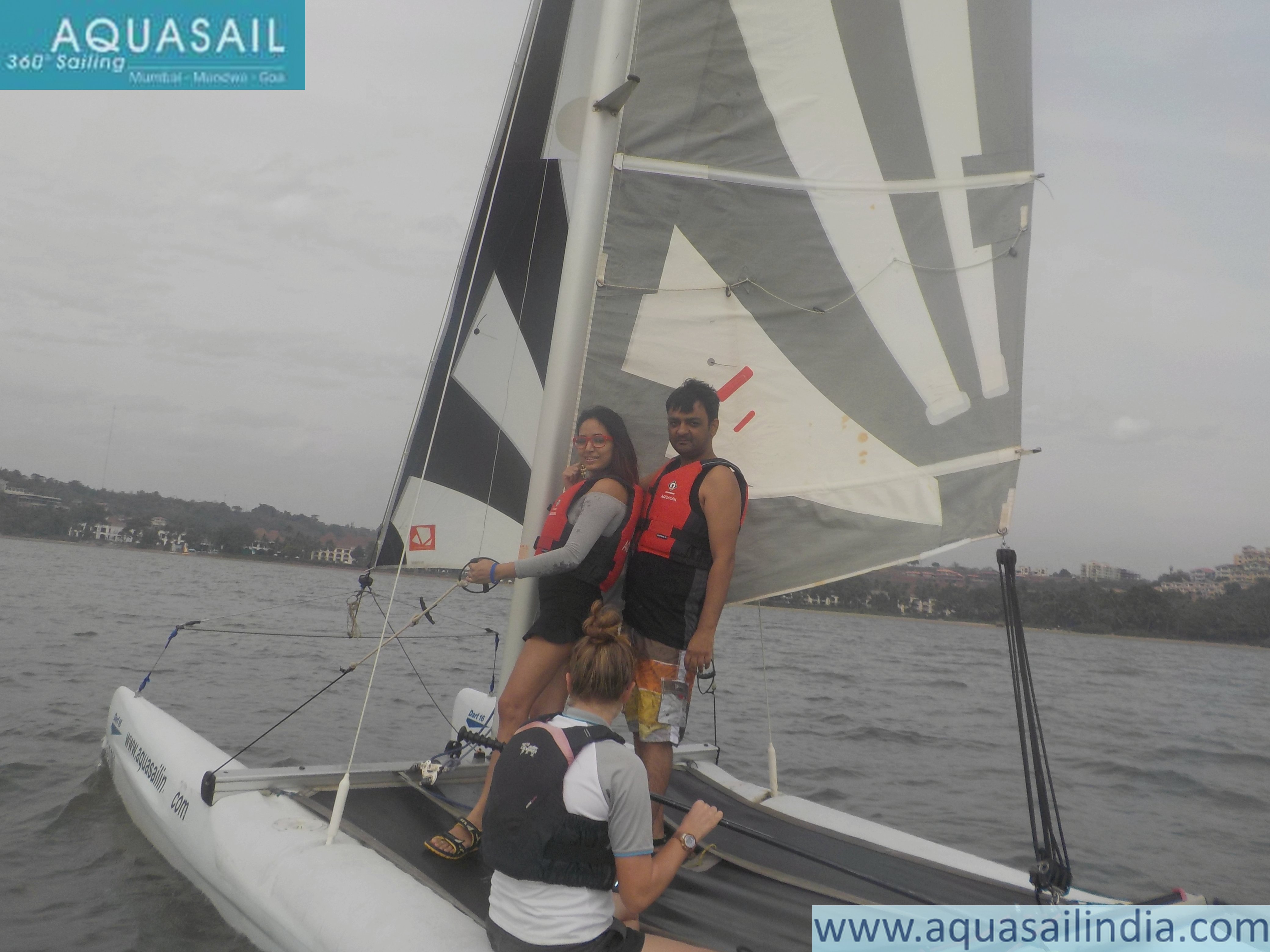